L’ Ambigu Funny name for a theater !!! It is a small wink to a high place of the Parisian culture which prospered from year to year and which made many jealous: L’ AMBIGU COMIQUE founded in 1769 on the boulevard du Temple in Paris by Audinot. Originally, puppet shows were held there and were a great success! Then the Ambigu proposed pantomimes, fairy tales which will put in scene children, puppets, acrobats. Comedies, Vaudeville, comic operas, dramas will be played.

All the theatrical genres will mingle to the great joy of an ever-increasing public and to the great displeasure of rival scenes that will not fail to put obstacles in their way: the Comédie Française, the Opera and the Italian Comedy.

L’Ambigu will oscillate between periods of great prosperity and great financial hardship.

The theater burned down in 1827 and was reborn in 1829 at the corner of Boulevard Saint Martin where it remains the most faithful representative of the dramatic traditions: what is called « the boulevard of crime.

It was transformed into a movie theater in 1920 and reopened as a theater in 1954 under the leadership of actor Christian Casadesus.

L’ambigu will be definitively closed in 1966 in spite of the protests of the entire profession. It will be demolished that same year.

This reference to cultural heritage is not the only reason that pushed the creators of the small black and red theater to baptize it « Ambigu »; At 7 rue de la Bourse, stood, still in 2014, one of the oldest sex shop in Avignon with its cinema, its peep show, and its famous cross of Saint André! That’s it! All the ambiguity of the place! Which is no longer one!

The whole team of the Ambigu theater will be happy to welcome you, audience and actors, in this warm, friendly place full of naughty memories! 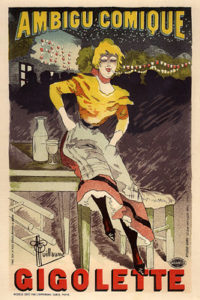 2022 CANCELLATION CLAUSE DUE TO COVID 19

In case of cancellation of the 2022 Festival d’Avignon decided by the health and administrative authorities, the theater managers undertake to reimburse productions and companies for the totality of the sums paid as a deposit for the reservation of one or more slots. The sums will be reimbursed by check for French companies and productions and by bank transfer for foreign structures accompanied by a proof of reimbursement. 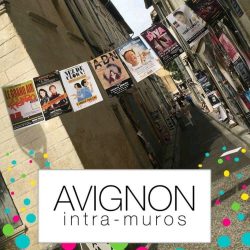